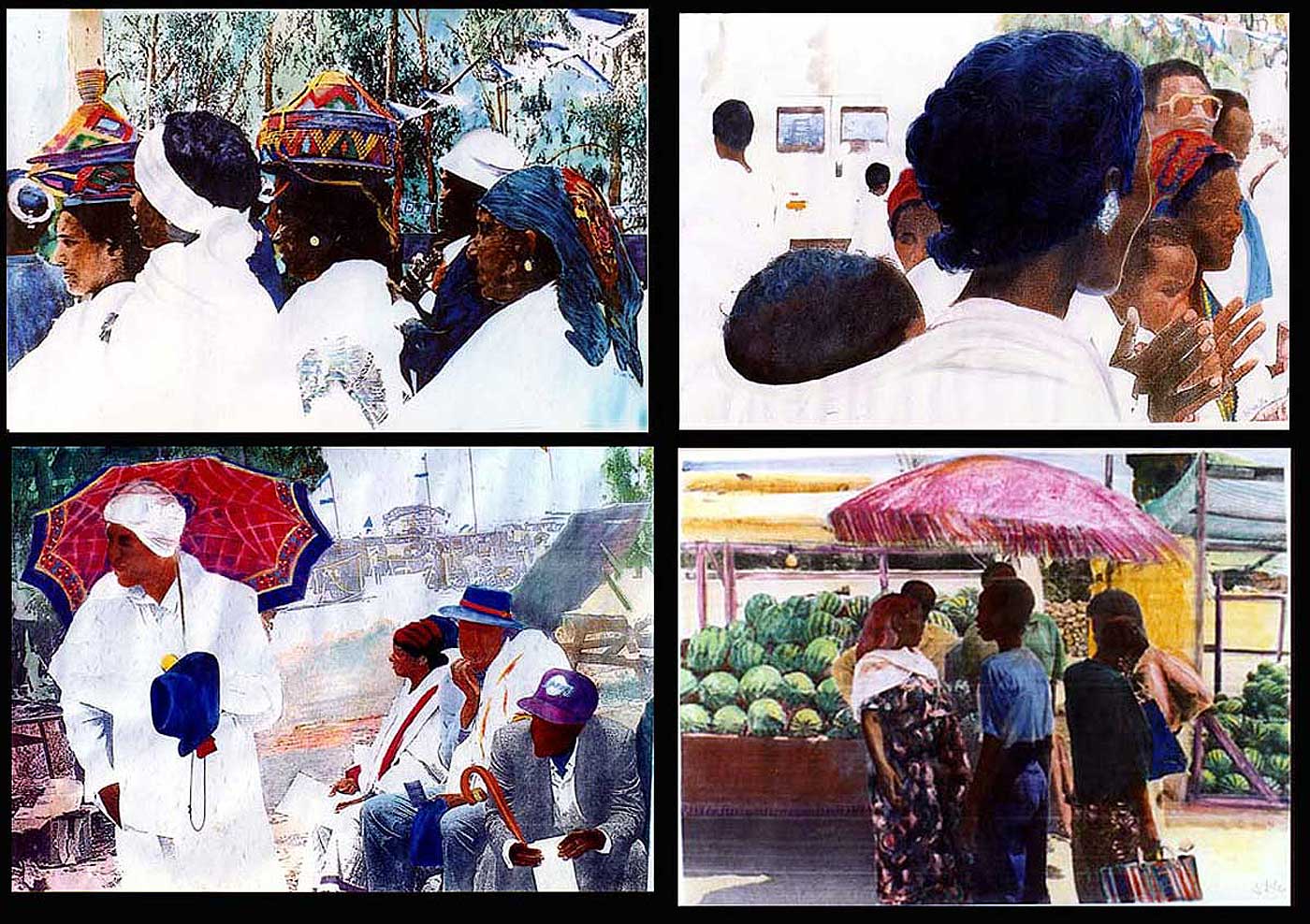 On Saturday, May 26, 1991, my wife, Yonnah, and I happened to turn on the television. We were living Israel and usually Saturday afternoon programming is given over to Israel  TV’s Arabic service.
(At that time there was only one channel.)  What we saw taking place that day, before our eyes was one of the most moving spectacles of our century.  That day, as we now can recount, a one day cease fire was declared in the civil war in Ethiopia. The rebel army, which was fighting, and later prevailed against the installed Communist  regime, was poised to attack Addis Ababa, the capital, where 15,000, the vast majority of Ethiopian Jews, had been gathered, awaiting the signal that would begin the final leg of their journey to the Holy Land.
Most of the Ethiopian Jews had lived in a rural agricultural region called  Gondar, and they had already sold, for little money, their homes, farms, and all of their possessions except what each could carry in one satchel to Addis Ababa.  Their needs: food, clothing, children’s education, and re- orientation training, would be attended to by the Jewish Agency, and this aid would continue for a time in Israel, as for all new immigrants.
The cease fire had been arranged secretly by the Israeli government and the leaders of both armies; however, the U.S. government was also instrumental in the negotiations.  When the 15,000 got the word and started filing onto the tarmac and into the waiting jumbo jets, carrying their children in their traditional robes, it was like watching the Exodus.  This time, there was not even room for a satchel.  It came as a total surprise to the millions of viewers around the world who watched it on the news.
The ancient history of Ethiopia's Jews, once called falasha, which means "outsiders," is shrouded in mystery.  Some, including many Ethiopians themselves, believe that they are descended from Dan, one of the ten lost tribes of Israel.  Another theory is that they are the descendants of Menelik I, the fabled son of King Solomon and the Queen of Sheba. The throne of the emperor, which ended with Haile Selassie, was established in this belief. Still others believe them to be descendants of Jews who left Israel for Egypt following the destruction of the First Temple in 586 BCE.
On the first anniversary of "Operation Solomon," as the epic rescue was code named, there was a ceremony held to celebrate.  It took place on Israel’s Independence Day in a park near the city of Beersheba, where many had settled.  It was quite by chance that my wife and I happened to be there.
Because of our combined signature, and since my last name is one of those names which in Hebrew can also be a first name, I am sometimes addressed by my wife’s last name. (Such are the occupational hazards of collaboration.) So it was a nonexistent Mr. Levy whom the gentleman from the Jewish Agency  called to invite to the celebration.  He was familiar with our work, but had never seen us and had actually found a different Levy in the phone book, who happened to know us and gave us the message.

The day of the celebration was extremely hot; there was an east wind from the desert, known as hamsin, when we arrived at the park, a forest of eucalyptus trees with some retired aircraft scattered around.  There were only two other artistic enterprises represented.  (We had been invited to sell our line of greeting cards in what was to be an art fair.) The other two enterprises consisted of the following: one recent immigrant from Russia who had brought a blanket full of icons and those wooden, egg shaped dolls that fit inside of one another, and a representative of Ethiopian  crafts.

Yonnah quickly sized up the situation, that selling was not going to be the order of the day.  But, she pointed out, a parade of Ethiopians from Operation Solomon was arriving, wearing traditional garb, playing traditional instruments, and dancing their traditional dances, which consisted mostly of neck and shoulder movements.
After that day, we became more familiar with Ethiopian culture.  Israel is, after all, at the crux of three continents, and is influenced by, and has had its influence on, all three.  Also, for several years, Yonnah taught art in a public school in Ashkelon which had many Ethiopian students.
Judaism has been hard to define, both from the inside and from the periphery. Is it a religion, or a race, or a nationality? The question of "Who is a Jew?" is constantly debated even in Israel's Knesset (Parliament). The racial designation has sometimes been used to segregate Jews, even those who had converted, as in Spain of the Inquisition or Nazi Germany.
The Ethiopian Jews, having been removed from the two major Jewish communities, the Sephardic and the Ashkenazi, for millenia, had some major differences in custom and tradition. (The Sephardic and Ashkenazi, having split at the time of the Inquisition and Expulsion from Spain have minor differences in custom and tradition.) So when large numbers of Ethiopian immigrants arrived in Israel in the early 1980's, they immediately were put through a ritual conversion, including for men a ritual circumsicion which involved the drawing of a drop of blood from the penis, since they were already circumsised. This caused some anger and humiliation among many Ethiopian immigrants who already considered themselves fully Jewish, so when Operation Solomon took place ten years later, no ritual conversion was practiced, although it was decided that for the sake of unity, Ethiopian children would be enrolled in the religious educational stream, whereas children of Russian immigrants were enrolled in the secular stream.